The new IPCC Report on “Global Warming of 1.5″C” provides yet another clear call for policies and actions that reduce the risks of climate change. More specifically, the IPCC report (2018, SPM-21) emphasizes that Pathways limiting global warming to 1.5°C with no or limited overshoot would require rapid and far-reaching transitions in energy, land, urban and infrastructure (including transport and buildings), and industrial systems (high confidence).”

The scale of the transitions and transformations that are called for are considered unprecedented, yet the approach to realizing these changes is fairly straightforward. The report draws attention to enabling conditions such as “multi-level governance, institutional capacity, policy instruments, technological innovation and transfer and mobilization of finance, and changes in human behaviour and lifestyles” (IPCC 2018, SPM-25).  The question is, will these be sufficient? Or do we need something more?  For example, new stories and new paradigms for social change?

This is a great time to explore  the wide range of understandings of our shared social reality, including how different worldviews and paradigms influence our relationship to and engagement with social change.  In particular, it is worth considering whether some of our core assumptions and beliefs about social reality have created blind spots, obscuring our collective potential for social change. Alternative paradigms may provide some important insights. For example, what does quantum social science have to offer to our understanding of transformatiaon? Alexander Wendt, author of Quantum Mind and Social Science, reminds us here that “quantum theory was not just a revolution in our understanding of the physical world; it was also a revolution in thought.”

The AdaptationCONNECTS project at the University of Oslo has recently announced a call for climate change short stories on Our Entangled Future that highlight the potential for quantum social change. Our Entangled Future will focus on the potential to  create alternatives to the dystopian futures that are beginning to feel a bit too real. We are looking for new narratives, stories and metaphors that can catalyze transformations to sustainability, especially compelling stories about quantum social change.  As George Lakoff and Mark Johnson write in Metaphors we Live By:  “New metaphors have the power to create a new reality.”

Al-Khalili, J. and McFadden J. Life on the Edge: The Coming of Age of Quantum Biology, (London, Bantam Press,
2014). 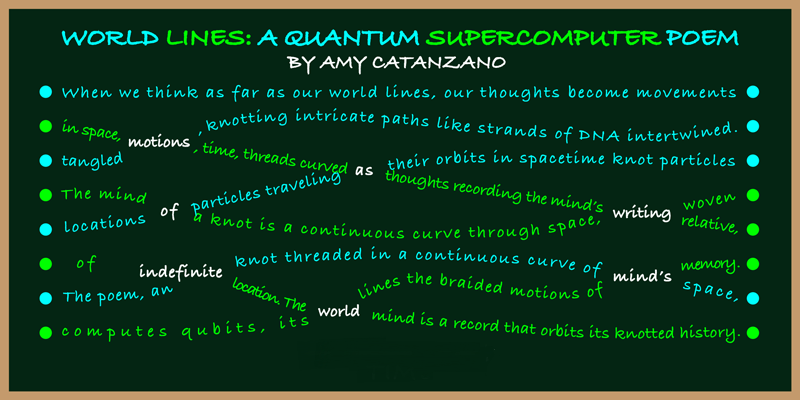